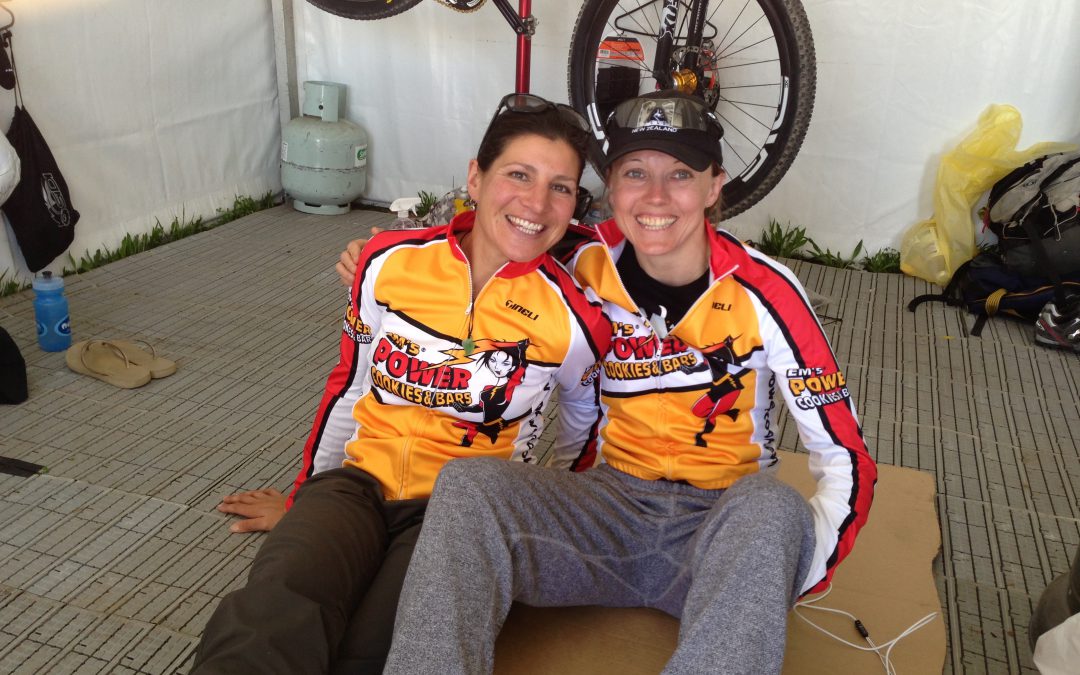 I had the pleasure of supporting Kim at her first WEMBO event in Canberra in 2013. What better way to sponsor an athlete than by being there for them? This was Kim’s first attempt at the title and was a relative virgin to 24Hr racing. She started out with a nutrition plan that didn’t quite go with the race conditions: it was hot and she was taking a protein drink as well as electrolyte and gels. With endurance racing that is at the limit of one’s threshold, we quickly learned that things were not going to plan. 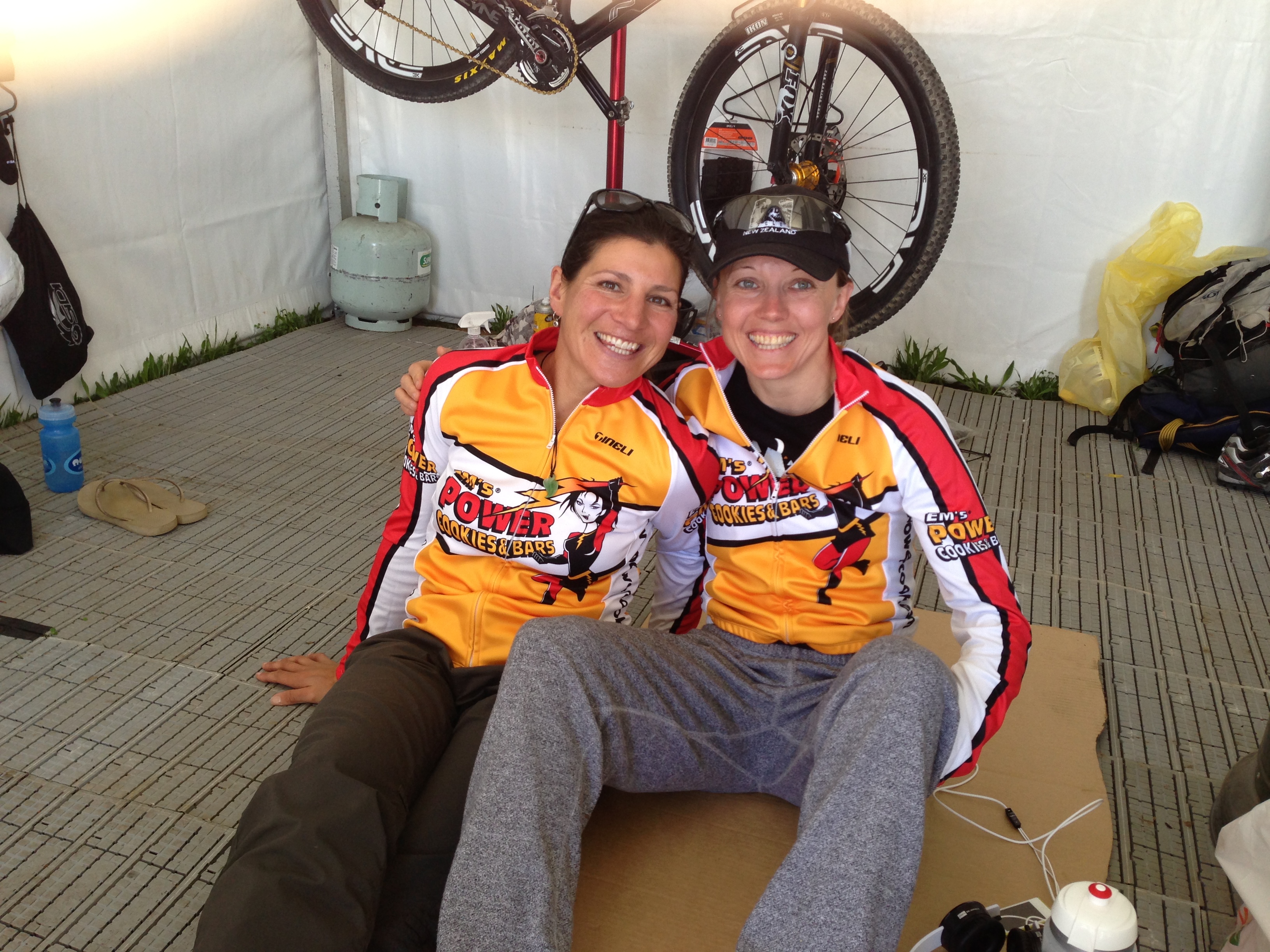 As soon as I discovered what was happening we reviewed the nutrition and put Kim on a simple regimen of 1 Em’s Power Bite every lap, along with a bottle of electrolyte/carbohydrate drink. We needed to settle her stomach while at the same time ensuring she was getting fuel in the tank. It took a few hours for Kim to dig herself out of the hole, but through the hours of the night she just got stronger and stronger. I remember at one point in the wee hours she came into the pit and gave me a quick, cookie-slobber smooch and said “thank you for making Em’s!” It made my day!

By the dawn-breaker lap, Kim had clawed her way into 2nd and was chasing hard for the title! It was so exciting to see her smashing her way through the field, but it spurred the reigning champ Jess Douglas to push deep in order to hold off Kim. As it unfolded, Kim went away with the silver and vowed to come up one better at the 2014 WEMBO.

Come October 2014 in Scotland Kim did just that. After another year of precise training and well-planned race-prep via Karapoti (smashing the record) and the BC Bike race in Canada, Kim was basically unstoppable. 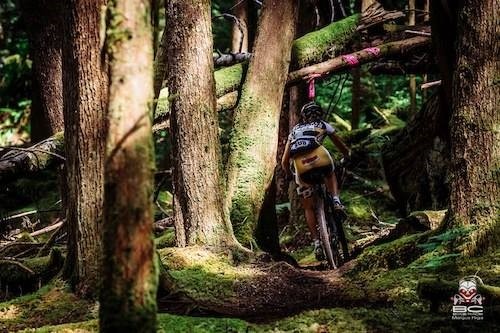 What we learned from Canberra was not to OVER-ENGINEER your race nutrition plan. This is a trap many athletes fall into and it is so easy with all the conflicting nutrition info out there, as well as different supplement and sports nutrition companies beating their chests. Oftentimes these energy/protein products look great nutritionally on paper (and based on what their high-paid marketing people tell you) but unfortunately under the stress of racing their effect on gut-tolerance can be devastating. Not to mention the poor palatability of most sports nutrition products.

This is where Em’s come in. Em’s Products are real-food energy bars that do not have added proteins or vitamins/minerals that you simply do not need while racing. This is why Em’s are so easy to eat, yummy and digestible. So they work. 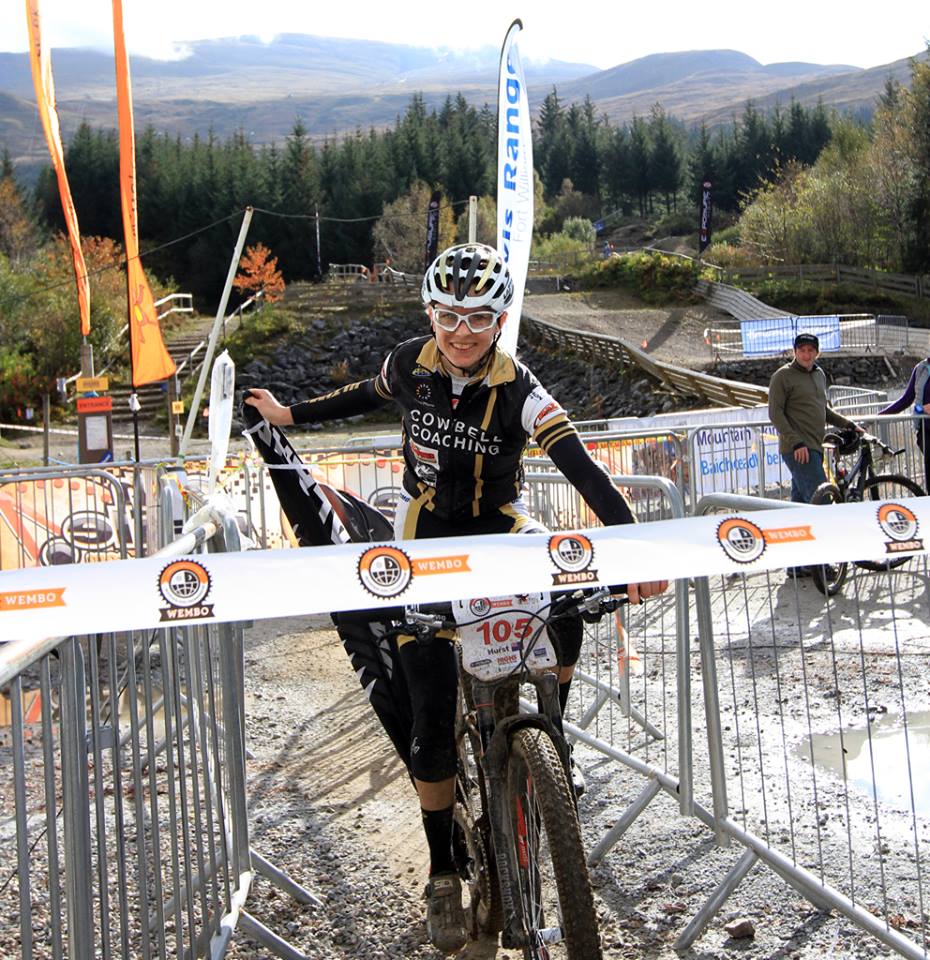 We went back to the basics for Scotland. Aiming for about 65g carb/hour Kim consumed ½ and Em’s Apricot Attack or Chocolate Oat Explosion (24g carb), in addition to 1 bottle of sports drink (40g carb) every hour over the entire 24 Hrs. She said that she never got tired of eating her Em’s and actually looked forward to the delicious snack. Other top athletes at WEMBO told me the same. Kim followed this regimen for the entire race, apart from some cooked oats at about the 18hr dawn-breaker mark, for a feel-good factor. Over the entire 24Hrs Kim never consumed one gel which I found interesting. 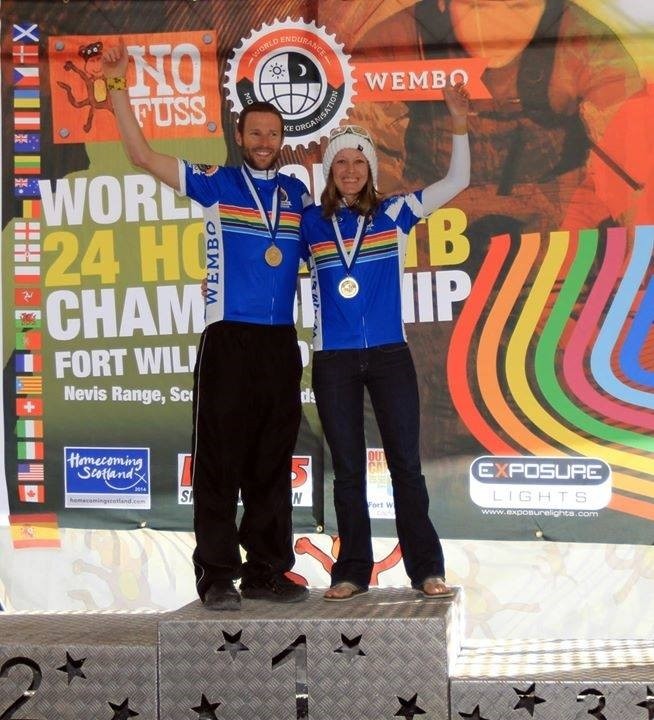 After chatting to Kim about this, she reported that gels certainly have their place in shorter, harder events such as Karapoti, or on the run during a triathlon. But for endurance-events when you can use sports drinks as the lion’s share of carbs, you can get away not having to use gels at all. Gels are convenient especially when running in a triathlon or ultra-marathon when you are not carrying fluid and there are aid stations for fluids. They are compact, easy to carry and consume on the go. But if you are using bottles or a Camelback, then use a good sports drink and top up with some real food like Em’s; this should suffice to meet your needs. If you need to get more in the tank, aiming for 80g carb/hr then by all means add some gels to top up. Also caffeinated gels are perfect for the latter 1/3 of an event for that extra kick.

So the take-home messages here are:

1.       Keep your nutrition plan simple – do not over-engineer it by adding unnecessary supplements, especially protein-based bars or drinks

2.       Do not use gels as your primary source of nutrition – consume a mix of real food and sports drinks too

3.       Include some real food like Em’s for slow-burning energy – this is KEY especially for longer events like IRONMAN and Coast to Coast!

4.       Choose a good sports drink that you like the taste of and that has carbohydrate and electrolyte

Smooth Transitions and Nutrition for Coast to...