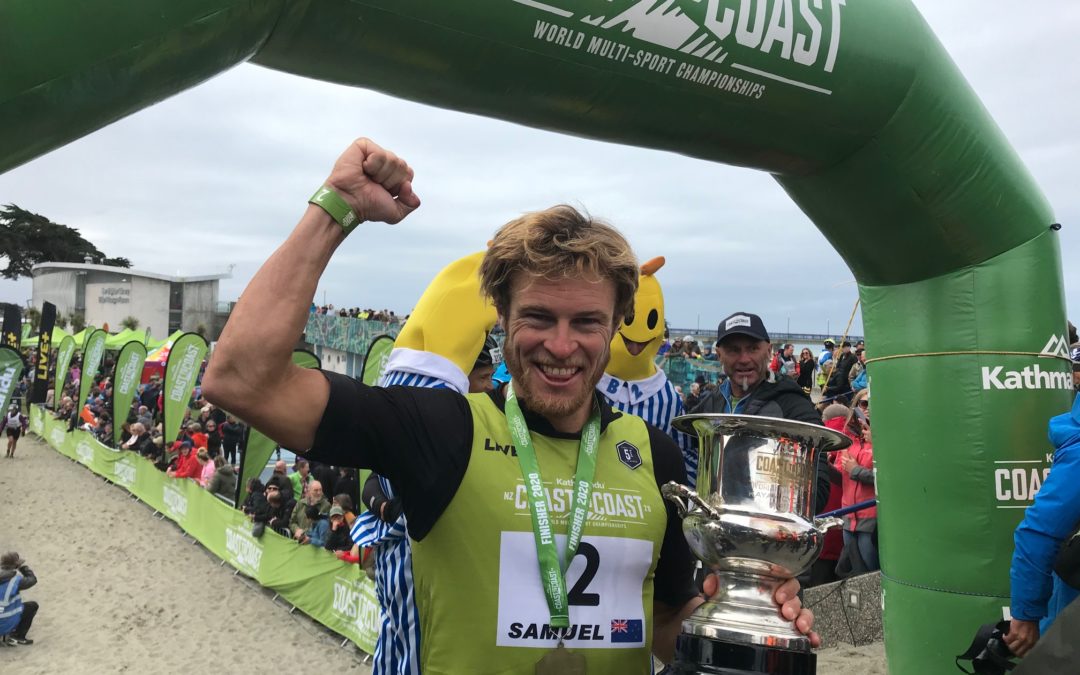 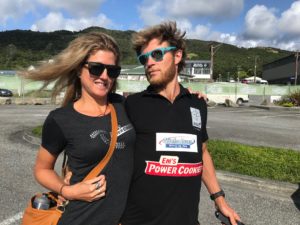 The Royal Couple Sam and Zoe

Winning the Coast to Coast is a monumental task. Sam Clark had won from 2016-2018 but sat out 2019 while champion athlete Dougal Allen took the top honours. This inspired Sam to return and regain his title this year. When we spoke about the support crew planning, I asked Sam if he wanted his new girlfriend Zoe Cruse to crew or get the A-Team of Greg Knight and myself back together. We went with the A-Team+ with Zoe as a new supporting addition; she brought an element of balance and emotional depth for Sam that completed us as a unit. 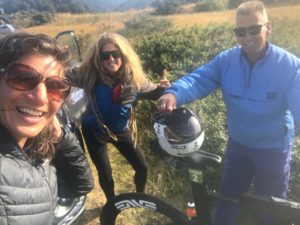 The A-Team: Powergirl Em, Zoe and the amazing Greg

Since I used to race myself, I know what goes into winning. Having the right stuff such as planning the gear, making perfect transitions and nutrition is only the beginning. But putting together a winning team goes beyond those basics. The winning ingredient for us is chemistry.

We met at our house that I rent every year in Kumara Junction Thursday afternoon. The location is key because it means we save 30 minutes in the morning of the race being right at the start line versus Greymouth or Hokitika. The extra time before a 6am start makes a big difference, as well as having a quiet space to focus, organise and bond together.

All four of us are proud weirdos. We are a bit eccentric and quirky so we understand how we tick, and we own it. We have a high level of intuition and trust for each other. Our roles are very different. Greg is the calming and wise force, takes care of the technical aspects for the bike, and does the pre-race meal. I take care of the race day nutrition and technical aspects of the kayak. And we both have a very high level of attention to detail so we know everything will be perfect. This doesn’t happen magically, but rather by design. Zoe’s role as Sam’s partner was to give him the comfort and security of love, as well as manage our social media pages over the weekend and helped with the gear. We all had 100% trust in each other and upon acknowledging this, our power jumped up a level. 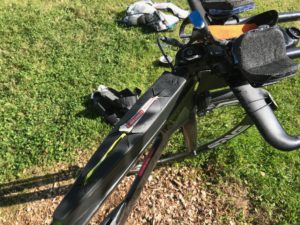 On the Friday before the race we had a sea of gear to organise, packing the compulsory gear for the mountain run, kayak, mixing drink bottles, bladders, energy gel flasks, and tucking Em’s Power Cookies into pockets. The bike required some tinkering with Sam’s disc wheel that was rubbing on the brakes. I was a little concerned when the grinder and drill came out but everything was under control and I kept quiet knowing that this was simply part of Sam’s process.

Once the gear was prepared, we do a dress rehearsal of the transitions. This was our 3rd year as the A-Team, so we didn’t need too long to run through it. Sam ordered an extra race bib to have at the kayak, which meant when he ran into transition, we didn’t have to fiddle with taking off and putting on the race bib over his kayak gear. We fashioned his spray skirt, life jacket and race bib as one unit for him to dive into in one spectacular move that was impressively slick. We were channeling our inner Gurney!

On race morning, the house is a bustle by 3:45am. Breakfast gets served and everyone falls into place. Sam walks to the first run/bike transition to rack his bike by 5:30am. We meet him there to check everything and wish him luck. He walks to the start at Kumara Beach, and we drive to Aikens Corner for the transition to the mountain run. It’s dark, cold, and nerve-wracking. 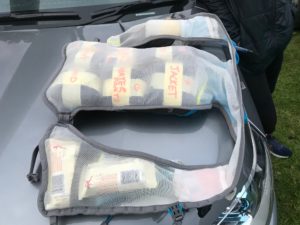 He came through Aikens with the lead men and we simply hand him his running pack, it was a zero-second transition compared to competitors who change from bike shoes into running shoes (Sam rides in his running shoes using foot plates which eliminates the need to stop). After the mountain run, Greg meets him at Klondyke Corner and puts him on the bike while I leap-frog ahead to the kayak transition at Mt. White Bridge. When Sam arrived he was leading by about 5 minutes. Our transition was less than 1 minute, compared to everyone else who had to stop to change gear. We were the envy of everyone, and we were winning, but the race was only half done. 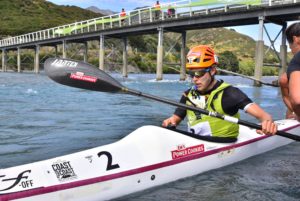 Our kayak transition was an enviable one

Coming off the 67km kayak, Sam was still leading but Dougal Allen was not far behind. The scene was electric. Greg and I busted out our silly-skimpy outfits despite the cold rain. We do this to give Sam a boost, and to remind him of how our team is unique, plus it gives everyone a giggle. It was another flawless transition. Sam was pushing hard and we talked him through as he flew away on his bike for the final leg. 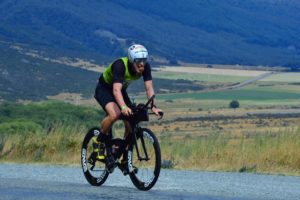 Sam demonstrating how to eat an Em’s Power Cookie on the bike!

Driving to the finish is always stressful because anything can happen on this last ride, especially with Dougal chasing who is renown as one of the fastest Ironman cyclists in the world. The media commentators thought that Dougal could catch Sam but I knew he couldn’t because riding hard after 8+ hours of racing is quite a different thing to riding hard after a <1 hour swim in an Ironman, and I know what Sam is capable of on the bike. As they made their way to Christchurch the media shifted their tune and said that Sam was flying, averaging 45-50km/hour and looked like a velodrome rider. We were ecstatic but reserved ourselves until Sam crossed the line first. 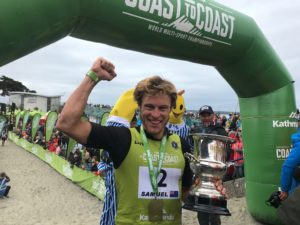 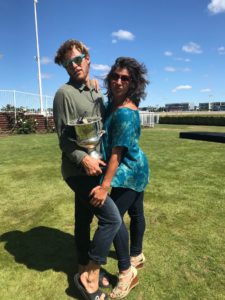 The scene at New Brighton was something out of a movie, and the passionate kiss between Sam and Zoe would make anyone melt. We did it!!! Afterwards, as we milled around and waited for the interviews and celebrations to settle down, one of the reporters told me that I must be a lucky charm. I said, “no, there is no such thing as luck, we’re just f***ing good” and we winked and smiled.

Smooth Transitions and Nutrition for Coast to...